I am writing to ask what Canada is doing to encourage and support the Nigerian Government in having the Nigerian School girls returned to their families.

I know that you are traveling to Abuja, Nigeria this week for the World Economic Forum on Africa. It concerns me that this Forum may be continuing on as if the Boko Haram group has not changed the course of so many lives right there where you will be. It concerns me too that these young lives are girls who, too often everywhere in the world, are treated as expendable. Mr. Paradis you have a daughter. I too have daughters, two of them. I can’t imagine the horror and pain that I would feel if this were to happen to them. In fact, through them I feel some of the horror and pain that the Nigerian parents are feeling. Can you feel it?

Please Mr Paradis, tell us what you are doing as Minister of International Development to support the #BringBackOurGirls campaign. Voting Canadians like me, mothers, parents like me, concerned world citizens like me, we need to know what stance Canada is taking with regard to this urgent issue. How is this impacting your participation in the World Economic on Africa in Abuja, Nigeria this week?

2) Some growing interest. Watch the ABC news video at  http://abcnews.go.com/International/bring-back-girls-rallying-cry-kidnapped-nigerian-schoolgirls/story?id=23611012

On Tuesday, March 25, we accompanied a large group from Leadnow and The Council of Canadians delivering our “Let People Vote” petition to your North Vancouver office. (A) Our petition included over 80,000 names of Canadians, many whom are outraged with the very UNfair Elections Act that your party is trying to ram through our parliament. While there is a lot wrong with what your party is proposing in this particular bill, our petitions are specifically asking your party to remove the parts of the new elections law that would suppress voting by young people, Aboriginal people and low-income people. 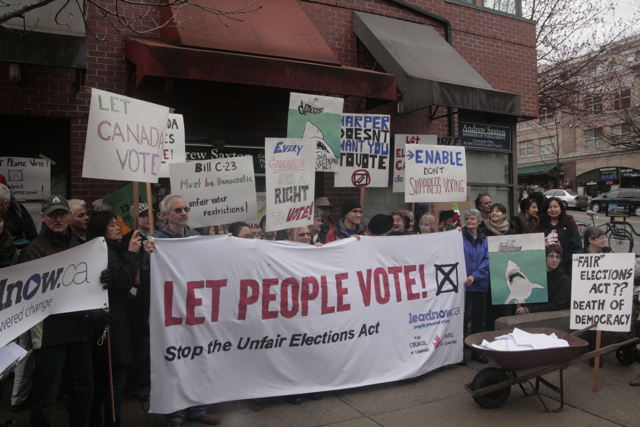 So there we were Mr. Saxton, en masse to hand deliver our wheelbarrow full of names to you.  We took the time from our own busy day to come in person. We understand you were in Ottawa and we were sorry to have missed you. However, as a courtesy to you we had phoned ahead to let your office know we were coming yet you were unable to return the courtesy by having someone there to hear us out.  We wonder, Mr Saxton, did you help your staff to plan an extended lunch break that day? 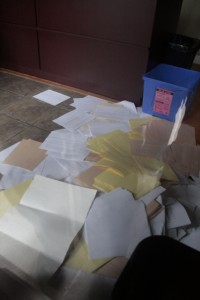 As no one was at your office to speak with us so that we simply had to leave our petition on the floor of your office, we are writing this letter to tell you what we were unable to tell you or your staff in person. We want you to know sir, that as Canadian citizens we continue to be outraged. We are outraged at the arrogant stance that you and your party are taking in your refusal to listen to what we Canadians are saying about Bill C-23.Your colleague, Mr Poilievre,  MP (Conservative, Nepean-Carleton) has refused to listen to or consult with non-partizan electoral experts such as Harry Neufeld (B), or even the chief electoral officer Marc Mayrand (C). Political science scholars across the country and even from abroad are writing to your party to express their grave concern with regards to what this act would mean for democracy in Canada and yet you march on, pretending that somehow this bill will make our elections more fair. (D) (E) Shame on you Mr. Saxton for being a part of this scam. Shame on you.

Since your office was closed Mr. Saxton, we also decided to visit your website to see what you had to report to Canadians on the very important matter of your party’s plan to fundamentally and unilaterally diminish our democracy; to see what you had to say about how  your party has re-written our election laws to dis-enfranchise thousands of Canadian Citizens; and to understand how you could justify having done so without consulting any of our respected electoral experts, scholars, provinces or citizens. Apparently democracy isn’t important enough for you, Mr Saxton, to open your doors, nor important enough to communicate to your constituents through your website. We used your own search engine Mr. Saxton – there was not one single occurrence of the “Fair Elections Act” on your website. Perhaps we should have searched for “UnFair Elections Act”? 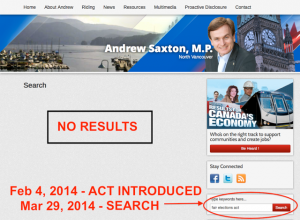 Our message to you Mr. Saxton is this – be assured that we will remember that your website was silent and your doors were locked when we came to discuss our concerns with you. You cannot pull the wool over our eyes. Canadians will vote on election day and weigh in on your refusal to listen to the people of this country.

I’m definitely on a steep learning curve and planning to blog more and more as I go, simply to chronicle my transformation into Another Inconvenient Citizen.  The idea of an Inconvienent Citizen, as will be posted on the new Inconvenient Citizen blog site being launched soon, is as follows:

The goal of An Inconvenient Citizen is to mobilize citizens under the banner of “protest for the rest of us”, including people who never really thought of themselves as protesters before. We believe people will be motivated to action once confronted with the facts about how the Harper government is negatively changing our democracy and negatively impacting our environment. Even if action is as low key as simply voting when they might not otherwise have voted (good), or convincing a number of others to vote who might not otherwise have voted (better); or (best) a combination of voting, convincing, signing petitions, writing letters to political parties, newspaper editors, etc. and generally becoming royal pains in the butt by advocating that our “first past the post” electoral system needs to be changed to give us a “fair democracy” (which for me includes the idea of a more “representative” system).

And – oh yes – we would like to see young Inconvenient Citizens re-engage with the electoral system, and see other older Inconvenient Citizens convincing youth to do so. Participate in the next election to achieve a modified system. How about a rallying cry like “YOUTH WANT IN”. (By the way, this slogan will resonate with people who remember Stephen Harper as a former Reform Party Member of Parliament who ran for office with the slogan “The West Wants In.”)

I’m excited to be identifying with this group. From the mentors within, I am learning more and more about a variety of issues and politics. Our original Inconvenient Citizen, Jackie DeRoo, is an excellent researcher. She is passionate and committed to issues around democracy and electoral reform as well as environmental health and sustainability. She is tenacious and knowledgeable. I’m honoured to work alongside her.

Over a year ago I attended a protest in Surrey, BC, where George Bush had been invited to speak. At that rally and then a followup event  Gail Davidson, Lawyer for Stop the War, spoke about being involved in activism. Her advice that I remember most clearly was that to be involved in activism one needs to not get sidetracked by the wide variety of issues, but instead pick one or two that are close to one’s heart and dig deep. For the past year those words, word that were meant to help and guide, have resonated with me and in a way that rather than being helpful have perhaps hindered my active involvement as I searched for the “right” issues, never quite sure if “this,” whatever it was, was the right issue. For now Inconvenient Citizens is helping me in providing a space to talk with peers and be inspired in the little things I can do. I’m able to let go a little of being overly concerned with whether or not each issue is what I want to commit to.  Through the Inconvenient Citizen group I am beginning to connect with other 55+ activists, many like Jackie who have not been particularly politically before now. Slowly we are becoming aware of the vast resource that our demographic group can provide to the political landscape. In reality I believe we are a sleeping giant just slowly awakening.